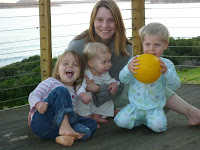 An American in Oz

It feels like only yesterday that I met Christine, my pal Jennifer’s little sister, while gathering signatures in Los Angeles on petitions for health care reform. She was still an undergraduate then. So seeing her via Google chat in her office in Adelaide where she practices psychology felt a little unreal. And the fact that she now has three children hardly seems possible. Christine, who has been living in Australia since 2006, was kind enough to take time out of her workday to talk to me about her experiences with the Australian health care system, as a patient, as a mother, and as a health care provider.

“How is mental health coverage in Australia?” I asked as we got the interview underway. I was surprised to learn that Medicare does cover some sessions with a psychologist. I had thought this was a service that was only covered by private insurance. Christine explained that a patient wanting to see a psychologist first goes to a GP to get a referral for a mental health plan. This means that Medicare will cover 6 sessions and then the patient has to go back to the GP to get a referral for 6 more sessions up to 18 sessions per year. Of course many Australians have private insurance that covers psychologists so they don’t have to depend on Medicare.

When I began asking about Christine’s experiences as a patient, she first explained a bit about her private insurance for which she pays $350 per month to cover herself, her husband, and her 3 children. I asked whether some people get private insurance as an employee benefit and the answer was no. Their insurance covers them for private hospital care and they also have ancillary coverage for things like dentists, physical therapists, and psychologists. At the level of coverage her family chose, they pay a $200 “excess”, which is like a deductible, each time they go to the hospital.

Christine has had 2 children while living in Australia. Because of her private insurance, “I got to go to a private hospital and I also got to have an obstetrician,” she told me. For women using the public system, they can either see a GP during the beginning of their pregnancy and then switch to a midwife or they can choose to just see a midwife for the entire pregnancy.

For the obstetrician, Christine paid $2,000 but then was reimbursed much of that amount because her total medical bills for the year went over the “Medicare Safety Net” threshold. The Medicare Safety Net protects Australians from high out-of-pocket costs for non-hospital medical expenses. There is also a Pharmaceutical Benefits Scheme Safety Net, which protects people from high medication costs. With the Medicare Safety Net, patients are reimbursed at one level after they have spent about $400 out-of-pocket and at a higher level after they have spent $1150 out-of-pocket. Now remember, Medicare typically covers most of the cost a doctor bill to begin with but the patient does have a copayment. Sometimes the out-of-pocket expense runs higher because the doctor charges more than the amount allowed by the Medicare Benefits Schedule.

I was very curious about how the system works with these reimbursements. For some people, I would think coming up with the money to pay a doctor could be difficult. So how long do you have to wait to get reimbursed? Christine told me it can be almost instantaneous. “The place where I work, we swipe their [credit/debit] card; they pay; then if they’re hooked up electronically with Medicare, we swipe Medicare’s card. Then we put their [credit/debit] card back in the machine and it puts the balance back into their account.” Nifty, huh?

The Australian system does have some annoyances for Christine. Yes, the waiting lists.

Christine considers it very fortunate that her father-in-law is a physician. He can often pull strings to get family members in to see a doctor more quickly. But not always.

Her daughter needed to see a gastroenterologist and she had to wait 1 ½ to 2 months in order to be seen. As a worried mother, “I felt it was more urgent,” Christine laughed. Then her daughter needed an endoscopy. But since that can be done in a private hospital, she was able to use her private insurance. Remember, private insurance is only for care provided in a hospital not for regular doctor appointments. Using the private insurance, Christine’s daughter got in for the endoscopy in one week rather than 3-4 weeks with the public system.

On another occasion, a check-up prior to starting school showed that her daughter was having some vision difficulties. It was going to take her 4-5 months to see a pediatric ophthalmologist but fortunately she got in slightly earlier due to a cancellation. “It wasn’t urgent by any means but I wanted her to get in before school started.”

Apparently, most folks who live in Australia aren’t so bothered by the waits. “I think I get more annoyed by things like that because I’m not used to it,” Christine observed. “But on the other hand, I do see that they feel very entitled to free health care. They get annoyed with having to pay anything. For me, I’m thinking, ‘Woo, all these things for free!’”

I finally asked Christine whether she would prefer getting health care from the U.S. system or the Australian system. Although she isn’t too fond of the waits, she said it had never caused her family a health complication. Her conclusion was, “I think I would rather be getting it through Australian system if for no other reason than you cannot be excluded from getting health care for a pre-existing medical condition, or forced to pay more for that reason.”

Thanks, Christine. Who knew all those years ago when we were gathering signatures for single payer health care in California, you’d end up living in a country with a national health care system – and 17 years later, we still wouldn’t have it in the U.S.?

Posted by The Health Care Chick at 3:59 AM