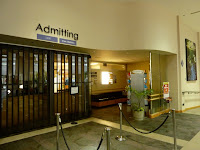 "Is Vancouver General Hospital mainly for low income Canadians?” I asked. I was reminded my friend Rosie had been living in Canada a long time by the confused look on her face. She explained to me that essentially all hospitals are available to all British Columbians with their government coverage, the Medical Services Plan. There aren't separate hospitals or health plans to treat poor people.

We took a walk over to Vancouver General and I saw a facility that looked more like Cedars Sinai than LA County -- modern, attractive, nice art on the walls. Rosie did clue me in that not all Canadian hospitals look like Vancouver General. In fact, "third world" was the phrase she used to describe the look of the hospital in Montreal where she had given birth to her children twenty years ago. She hastened to say that the care she was given there was excellent nevertheless.

Although all the full service hospitals are public, there are a growing number of private clinics and surgical centers for which people pay out-of-pocket. This is quite controversial because British Columbian law (as well as the law in 5 other provinces) prohibits health care providers and facilities from charging patients for the medically necessary procedures that are covered by the government system. These private facilities for the most part provide cosmetic surgery, MRIs and other diagnostic procedures, arthroscopic surgery, and other simple orthopedic surgeries. Some of the care taking place does fall in the category of medically necessary and this is the subject of a case currently being fought out in the courts.

The scale of the private surgery centers is pretty small -- 5-10 beds per center for overnight stays. For the most part, the government insurance doesn't pick up the tab at private clinics and private health insurance is only allowed to cover supplemental services like optometry, dental, physical therapy, chiropractic, and some cosmetic services. Understandably, the public isn't exactly flocking to spend their own money at private clinics.

Some people who can afford to pay out-of-pocket are willing to in order to avoid waiting. However, many Canadians are deeply resentful about folks "jumping the queue". I've noticed a strong sentiment in favor of equal access for all Canadian residents.

The private centers sometimes are successfully billing the government Medical Services Plan, which is a matter of great concern to those wanting to defend the present health care system against privatization. When Canadians talk about privatizing health care, they are referring to allowing provincial government health plan payments to cover procedures in private hospitals. They are also referring to allowing private insurance payments and private individual payments for the medically necessary care that is covered by their provincial health plans.

For those of you who would like a better understanding of the privatization controversy in Canada (and you wonks know who you are) here are a couple of links:

This is a bit like the issue in the US of public money subsidizing vouchers for private schools – It tends to undermine the public system. In addition, the siphoning off of doctors into private clinics will only exacerbate the problem of waiting times for the general public.

Will Canada go down the road of a two-tiered health care system? Not without a fight.

Posted by The Health Care Chick at 1:30 AM